Ahhhh. That’s better. I needed to get away from it all, and I couldn’t have chosen a better spot. I’ve just spent a week in this little cottage at the far end of a private island in Scotland. The nearest neighbour was a 40 minute hike away, over hills, moors, up a rope and through a pine forest. My phone didn’t work and there was no electricity. Heavenly. I had to be swept out with the proverbial broom. 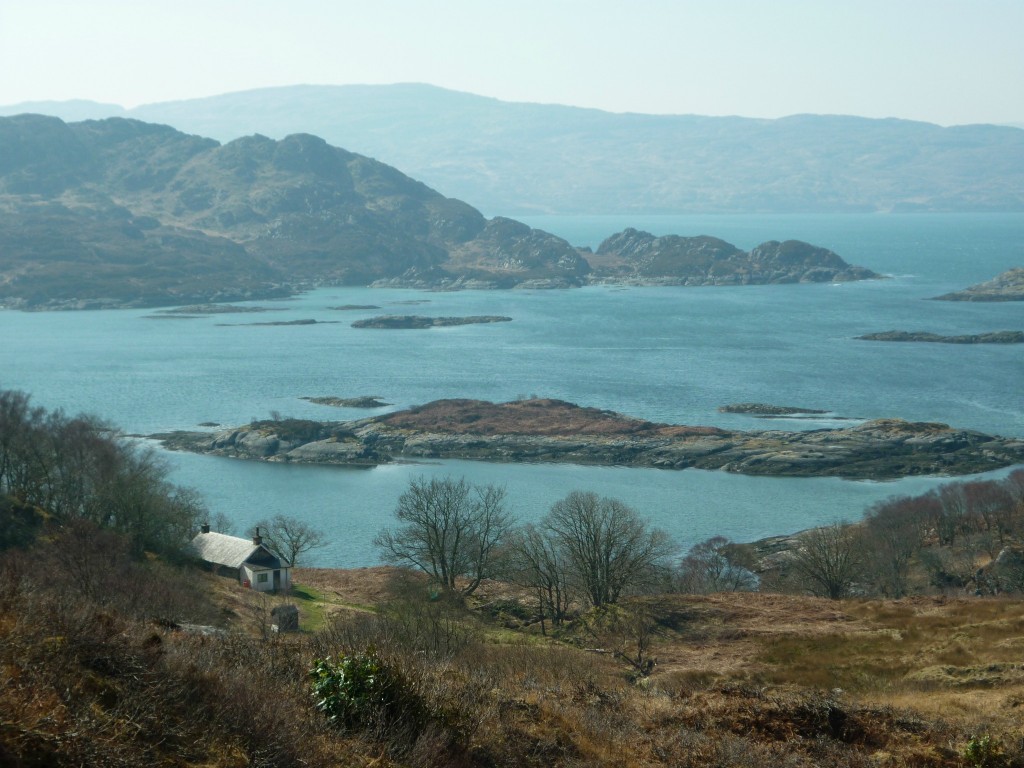 The cottage is one of a handful on the island of Eilean Shona, with the rest clustered around the big house down at the other end. The island is around 1 and a half miles wide by 2 and a half miles long, and walking around it takes about 5 hours. We were taken by inflatable motor boat to our cottage and had to leap out onto the beach like Marine Commandos. From there, up a little track, was our cottage. The soft sound of the sea was drowned out by the stream which runs past the property, falling into a series of waterfalls and plunge pools on the way down to the beach. 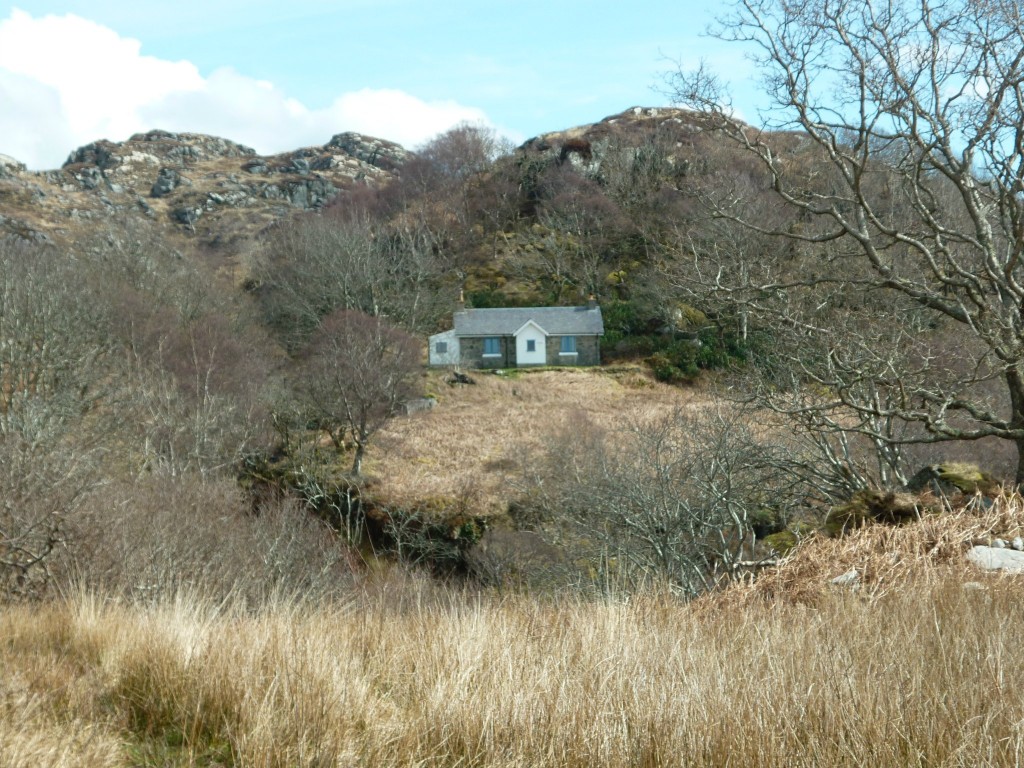 When we arrived the weather and the landscape was pretty wintery. But after the first day the sky was bright blue and it was hot enough for me to take a plunge in the river. Over the week primroses and buttercups bloomed all over the hills and the trees got their buds on, if not their spring leaves. The reason I chose this cottage was that it is completely off-grid. I guess I was looking for a repeat of my holiday at the bothy (itself just a few miles north of the island) – all Cuppa-Soup from a camping stove and general outdoorsyness. Only with a mattress. So for a day or so the extraordinary luxury the cottage achieves was a little disorientating. Check out the bathroom below! 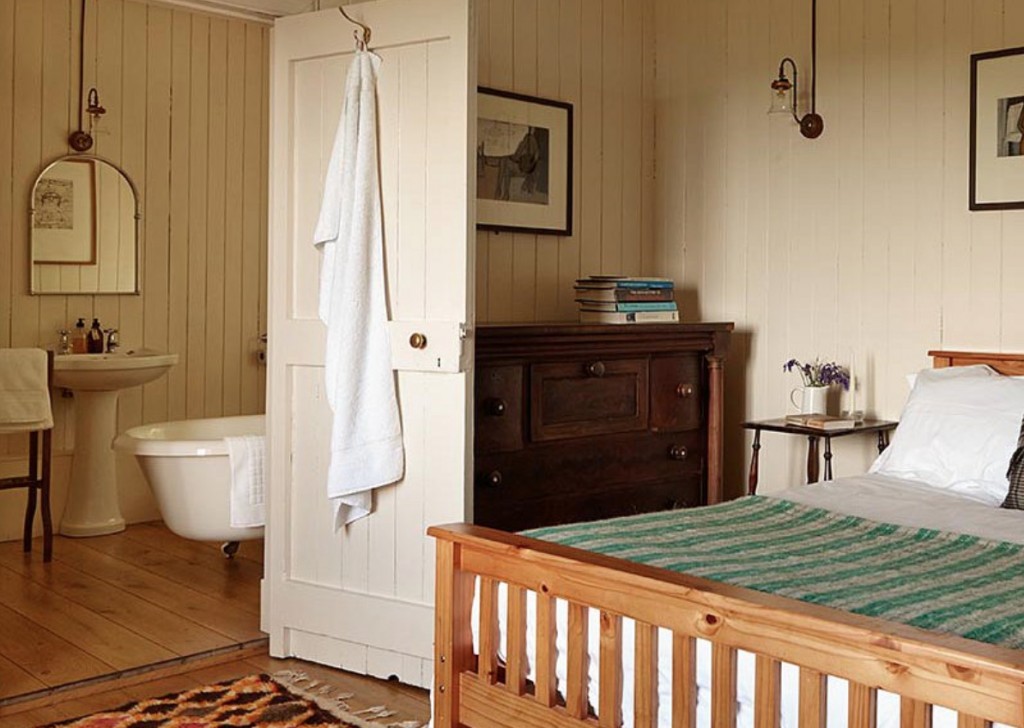 The cottage gets its water from the river, and the lighting and even a fridge-freezer are powered by a couple of gas canisters. The stove heated the rooms and also the water. Every time I turned on a tap – especially in the delightfully elegant bathroom, with a view of the sea – and piping hot water poured forth I wanted to laugh out loud with amazement. It was very informative to me in terms of what you could actually do on land with no services attached. Unlike a bothy, you could actually live here long-term. As long as you arranged life so you didn’t often have to go back the mainland of course… But why would you want to? 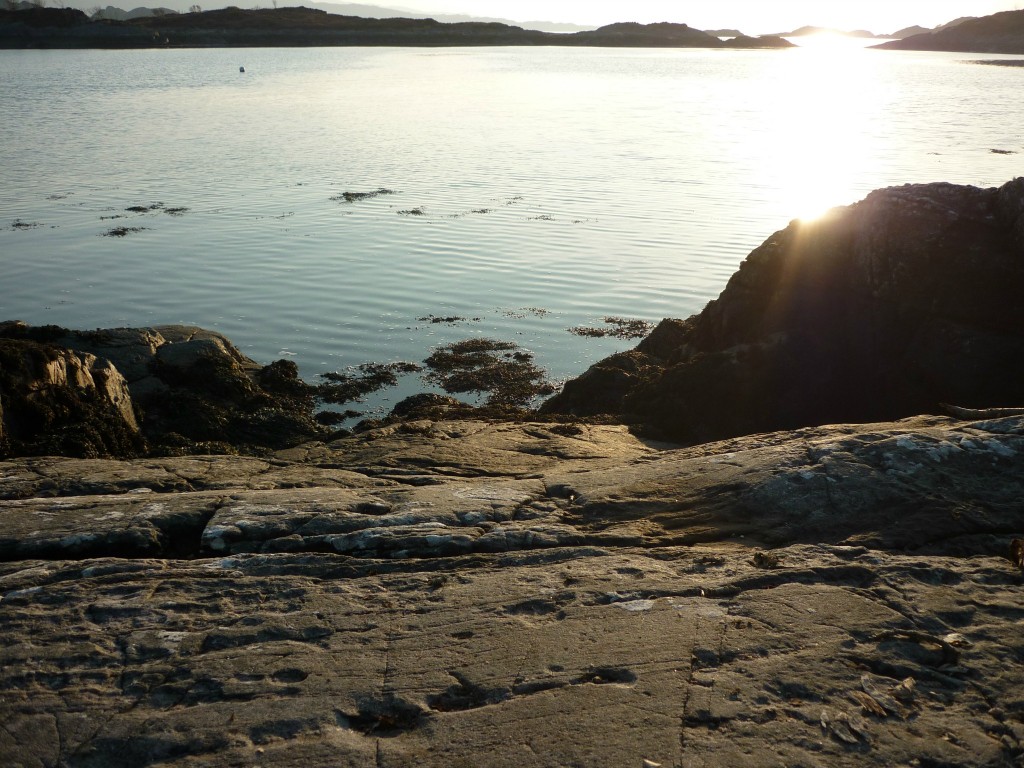 At around 7 each night the wind dropped down to nothing, and I would go and lie down on the rocks, listening to the basin of the cove gradually filling up like a bath. One evening I was stopped dead in my tracks as I walked there. A head was poked above the water watching me a few meters out. A sea otter was having a bit of an evening fish and had stopped to eyeball me. He kept bobbing under the water then coming up a few feet nearer to get a better look. He appeared a little like a waterborne cat – sleek, curious and rather dapper. 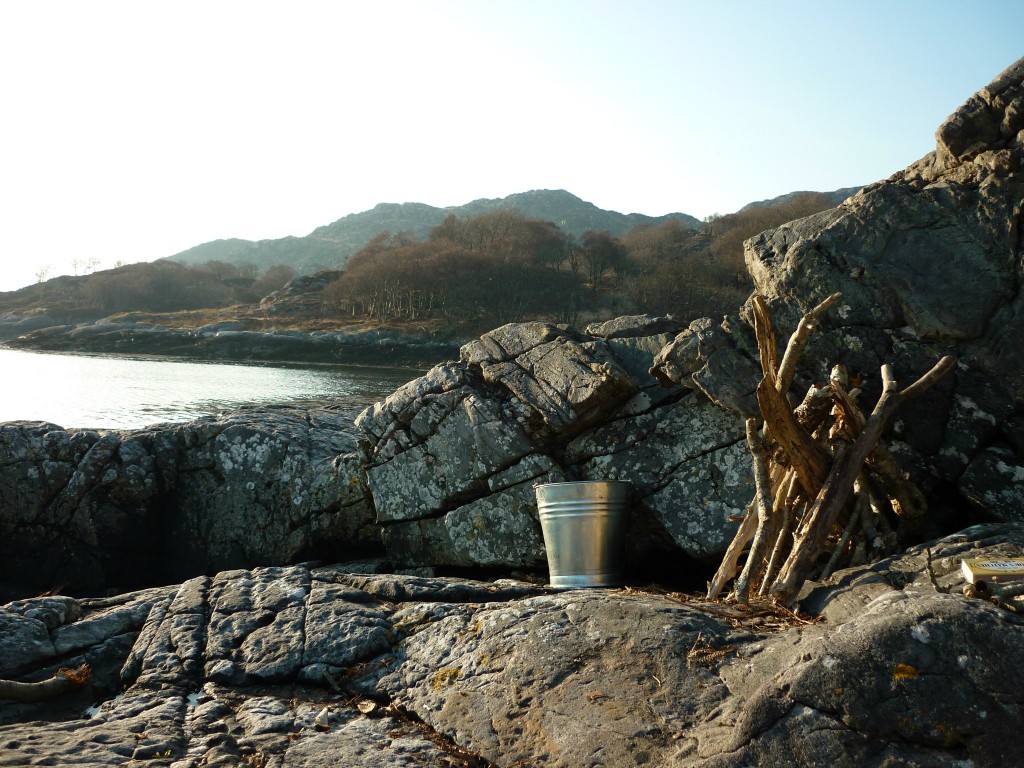 Each night after that we took a blanket, binoculars and a bottle of wine down, sitting on the rocks until the sun had sunk into the sea, watching for the otter. And he came and went, watching us all the while. One evening he was in the shallows, scooting about after something tasty, when a very large fish leapt feet into the air nearby, giving both of them a shock. Even when we lit a fire he still stayed there, a black dot watching our curious ways. 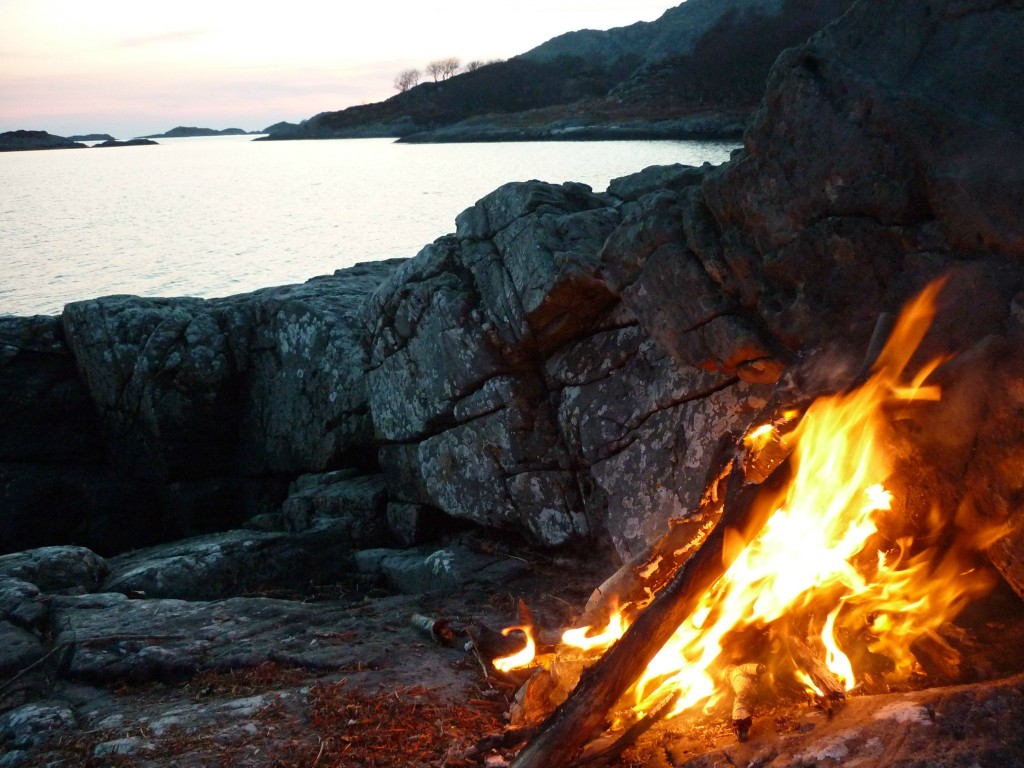 Why no pictures of the otter? Well he wasn’t taking pictures of us. I know lots of people go to the cottage with photographing wildlife as a major activity, but for me it was him looking at us that was so special. We saw red deer stags too, regarding us from the crest of the hills, sea eagles and basking seals. Every cove, crevice and crag of the island revealed something to stare at, and every fold of the hills also hid a little cluster of ruined crofting cottages, telling its own history of the place… but I’ll be back later in the week with a report on that, gleaned from a surprising source. 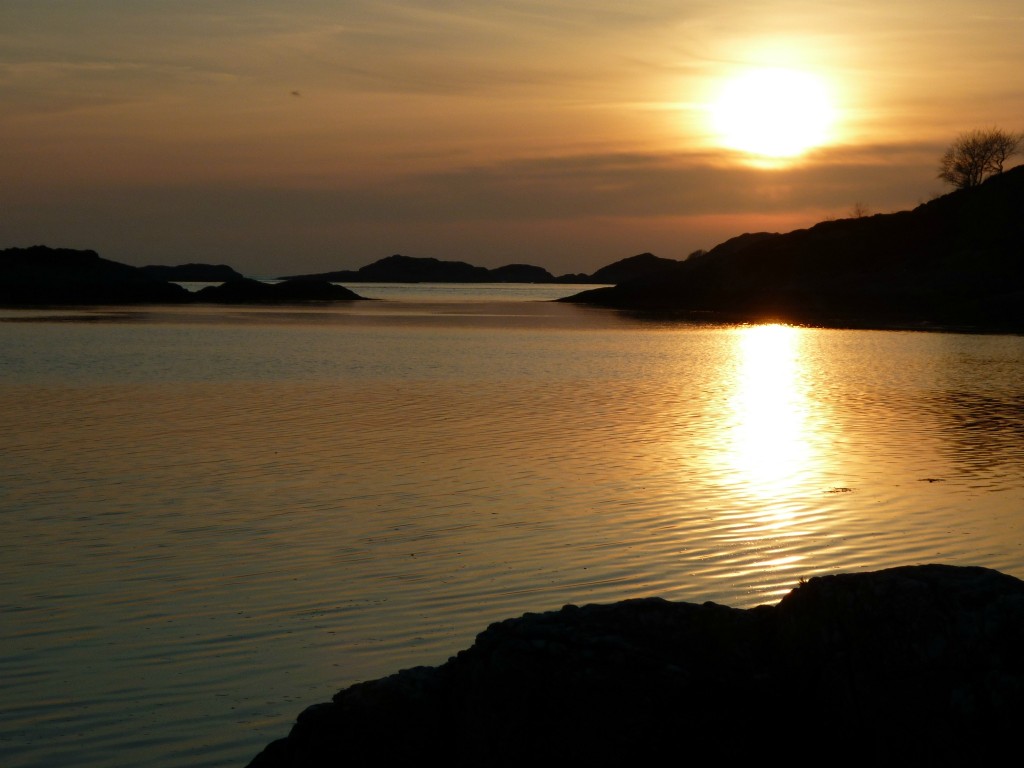